skip to main | skip to sidebar

I really didn't fall off the Earth

Alas, I've been gone for a while. Losing your Dad and dog within 30 days of each other isn't a walk in the park. It hit me pretty hard. Having a wonky computer didn't help. Lady Nottaguy-TYG did something to get me out of my funk and it has kept me very busy. More about that in my next post. Sorry to keep you hanging. I'll also try to get back to writing my Flashback Friday posts.
Posted by Sir Nottaguy-Imadad at 6:30 PM No comments:

Those of you who have not heard, my dad passed away this Monday. I'm going to use this post to flashback to some of my Flashback Friday posts dealing with my dad.

This story is one of my fondest memories of my dad.

This story deals with one of our family bonding activities.

This story tells of Dad's reaction to discovering that I lied to him.

This story tells of my favorite practical joke that I played on Dad.

And finally, this story tells how dad got us indoor plumbing for the first time.

I'm going to miss Dad tremendously but watching how ALS had ravaged him over the last couple of years was absolutely heartbreaking. Rest in peace, Dad. 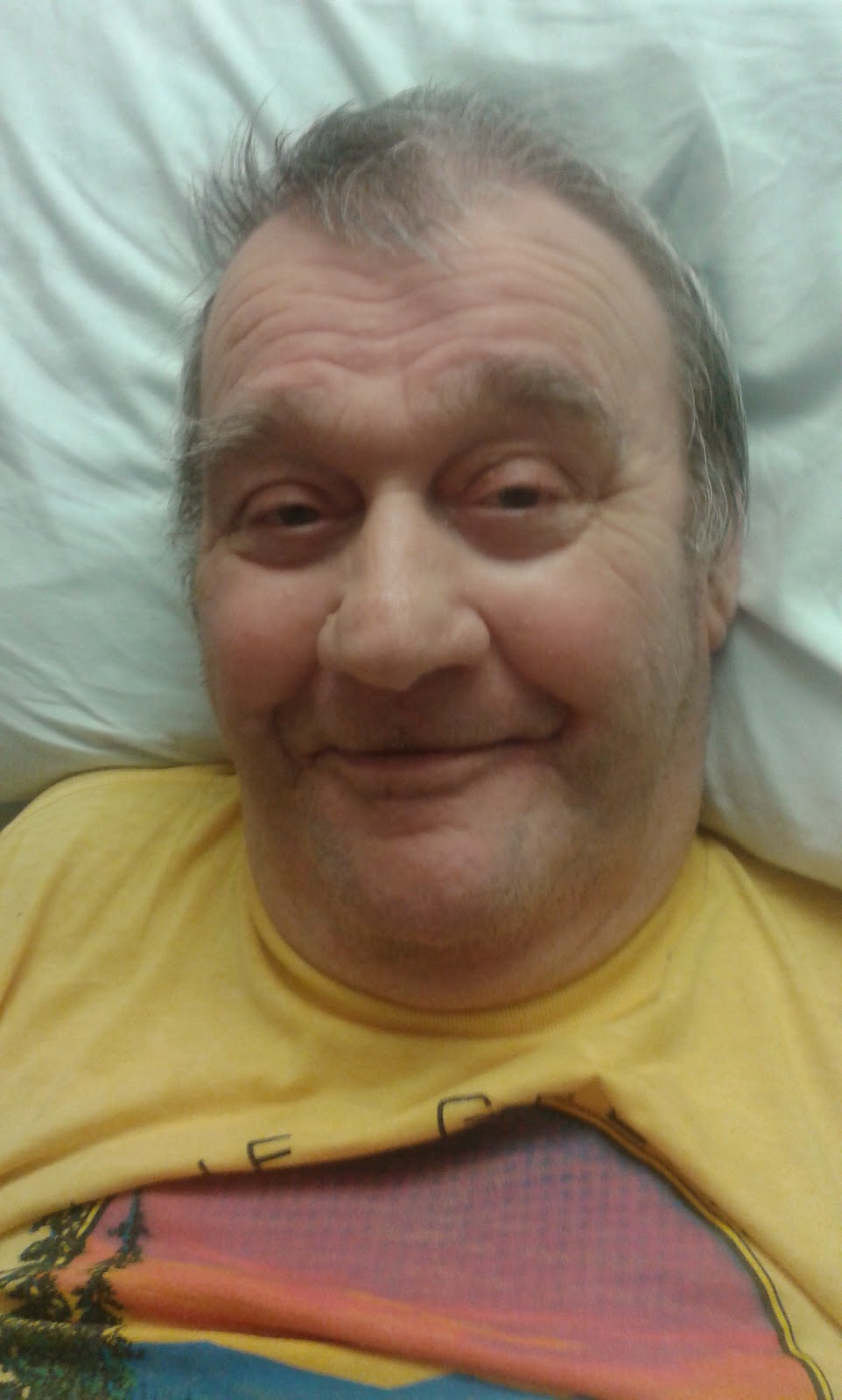 Posted by Sir Nottaguy-Imadad at 1:34 PM No comments:

Welcome once again to another fast paced Flashback Friday. I say fast paced because this post deals with speeding, and what can happen if you're not a very experienced driver.

I've written several times about the Crook boys that lived beside us. Justa was the coolest thing this side of Antarctica. He ran with the "Hood" crowd. Skipping school & smoking dope was what he liked to do best. If he could do both, he was happy as a lark.

One day, as the bus stopped to pick us up for school, I didn't see Justa. I asked Sneaky where he was. "One of his friends stopped by in a van and picked him up. He told Mom that he was getting a ride to school, but I'll bet he doesn't make it there". I knew the friend that Sneaky was talking about. The kids called him "Bug". He was tall, thin & had stringy blond hair (Hmm. I just described Justa too).

When we got to school, I checked out the parking lot for Bug's van. He drove the only white panel van in the school. He always said that there was a bed in the back. I don't know if there was or not because you couldn't trust most of what came out of his mouth.

About midway through the day, we heard the scream of sirens going by the west side of the school. The road that lead to the entrance of my school off the main highway, was paved only as far as the school grounds. It was gravel the rest of the way until you reached another highway about two miles away.

Through the grapevine we heard that Bugs had been driving the van toward the school on the gravel part of the road. There is a pretty sharp curve before you get to the school property. He had his license about as long as I did (he was in my Drivers-Ed class) and he hit that curve too fast. It went into a skid and then started to roll. It has rolled at least three times before it came to rest on its top. Bugs & Justa were taken to the ER in an emergency squad. Fortunately, the injuries were mild compared to what they could have been. Bug suffered a broken arm, bruises & lacerations. Justa received a concussion, bruises & lacerations. The van was totaled. Do you think they learned anything from this. Nope.
Posted by Sir Nottaguy-Imadad at 8:29 PM No comments:

Yesterday, I turned 51. Seeing that I've already had my mid-life crisis, it wasn't that big of a deal. My daughter, The Ogre, came over with her husband, The Huntsman, and their two kids, The Boy & The Girl. My wife, Lady-Nottaguy-TYG, had made cube steaks in gravy, mashed potatoes, green beans, & biscuits for supper. She also had picked up a "Cake Boss" cake from Kroger. The meal was great and so was the cake. 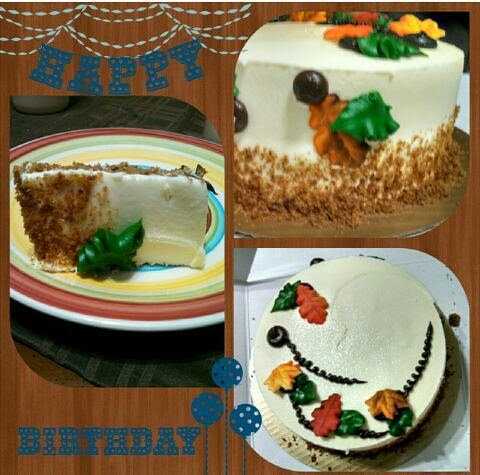 On Saturday, which is the actual date of my birth, My wife set up a date with a couple from our church to go to Logan's Roadhouse in Mansfield. I don't usually use the real names of establishments here, but the service was astounding and the meal was great. I figured I'd give them a shoutout.

Anyway, once we got there, we ran into four more of our friends. After a meal of salad, steak & baked potato, our waiter talked us into ordering dessert. i was content to come home and eat some more cake, but why not. We order a peanut butter ice cream thingee and were astounded when they brought it out. 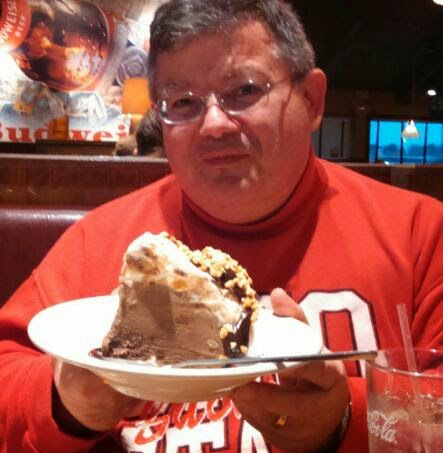 Huge does not begin to describe this. We each had ordered one to share with our spouse. We could have shared this with the whole table. There's a Veggie Tale episode where a resturant opens up and advertizes "Food as big as your head". This very nearly was.

Lastly, as we were heading to bed, it dawned on us that we needed to set our clocks back for daylight savings was ending. There's nothing like getting an extra hour's sleep for your birthday.

Posted by Sir Nottaguy-Imadad at 7:51 AM No comments:

Hello, Welcome once again to "Minutia Matinee" where you get to hear about people that you don't know and places that you've never heard of. Today, I'll attempt to entertain you with a tale of horror. My best friend told me that he was moving.

I showed up at school like any other normal day.  I filed into my home room class where Bart is talking to a couple of other kids. He motions me over.

"I was just telling them that my family is moving." said Bart. Were moving to a different town. Dad says our landlord won't do what he's supposed to do so he's not staying another month in that house."

With this information, my heart nearly stops beating. My best friend moving away? Say it ain't so.

After seeing the effect of this bomb that he dropped on the folks that were listening to him, he smiled and said, "We're moving from Marengo back to Sparta." A collective sigh went up. Sparta was still in our school district. Bart was moving away, just moving. They lived in Sparta the first time I went to his house.He was going to live so close to the school that he could walk there. Which to him was a great relief because he had a girl on his bus that he called "Frog" that annoyed him to no end.

I don't mind if my friends move, I just don't like them to move away.

Posted by Sir Nottaguy-Imadad at 9:23 AM No comments:

The other day we were sitting down to supper with two of our grandkids, "The Boy" & "The Girl". The Girl, who is five, turns to Lady Nottaguy_TYG and asks her, "Nana, where are your kids?" My wife told her, "Honey, My kids are grown up. My kids are your mommy and Aunt Lemon." The girl processed that for a moment, then replied "So,... you're old?" I really did LOL.
Posted by Sir Nottaguy-Imadad at 5:07 AM No comments:

A Bad Choice For Bart

Anyway, this post is about a choice that I offered Bart. In retrospect, he chose wrong. However, neither of us could have known just how wrong at the time.

My on & off girlfriend, Toni, had gotten me interested in collecting baseball cards. I had also been buying football cards. This was the second year that I had  collected. I had many cards that were the same. These are called "doubles".

Bart also had some older cards that his older brother had given him when he got married & moved out. The gem of his collection was Mickey Mantle's last card. I asked him if he would like to get into collecting current cards. He said he would, but he was more of a football fan than a baseball fan. I told him that I could hook him up with some of my football "doubles".


He especially liked the Philadelphia Eagles. I had a few doubles of them that I let him have. He also liked quarterbacks (the most popular position on the field). I dug through my stash to find some quarterbacks for him. I didn't have very many, but I offered him one from each team that I had. Each of the teams had a card of their starting QB and most had a card of the back-up. There were a couple of bad teams that had two quarterbacks with similar stats.

I offered Bart his choice of one particular team. After looking at the stats on the back, Bart chose the guy that had passed for the most yards because he must have been the starter. The card he chose was Steve DeBerg who passed for 1,998 yards for the San Francisco 49ers. The card that he passed up was of a guy that had thrown for 1,795 yards for the same team. This was DeBerg's third year in the league and the other QB had been in the league for two.

The other guy was some guy named Joe Montana. What I didn't realize was that since he wasn't pictured the previous year, this was his rookie card. Yes, I talking about THE Joe Montana that was Super Bowl MVP three times and threw for over 50,000 yards in his NFL career. DeBerg had an OK career, but lost the starting QB gig three times to younger quarterbacks. The first was with the 49er losing out to Montana. He then went to the Broncos for a few years and a youngster named John Elway beat him out for the job. That lead him to the Buccaneers where a transplant from the USFL took his spot. That quarterback's name was Steve Young. I guess if you're going to lose a job, getting beat out by three Football Hall of Fame quarterbacks is the way to do it.

Sir Nottaguy-Imadad
I am a 50+ year old grandfather, father & husband. I am very quiet, just ask my wife & daughters (and watch their eyes roll). I teach 3rd & 4th grade in Sunday School & work in the metal cutting field as a profession. I have a 90 degree bend to my sense of humor, so odd thing catch my attention & make me laugh. The title "Upon His Hind Legs" come from a phrase in the book "A Little Better Than Plumb" by Janice Holt Giles. I highly recommend this book to all couples.It refers to the normally quiet husband (like me) who when riled, can and will rise upon his hind legs and let out a roar like a lion or bear. I began blogging at the suggestion of my oldest daughter, to chronicle my childhood stories. They can be found in my weekly column "Flashback Friday".

Subjects & Allies of the realm